We arrived in Milan by train from Florence mid-afternoon. Our first order of business was to check in to our hotel, from where we then traveled on foot for several hours, mostly for the purpose of shopping. 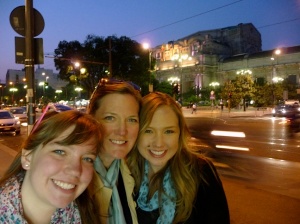 We were on what is known as the biggest shopping street in Milan, Corso Buenos Aires. I think Chloe’s head actually exploded. Over the last few months she has been shopping in both Paris and Milan.

At dinner tonight, however, while putting Chloe’s head back together, we were able to point out that Ella, her little sister, in the span of the last 13 days, has breathed the air of both Paris and Milan, as well as that of London. I think that straightened Chloe out well enough. It’s a little humbling for her to know that her sister has been to London, one of the world’s fashion centers, and she hasn’t. I like to point out that I’ve not only been to Omaha, I was born there. That doesn’t seem to impress them.

Anyway, we likely ate our last Italian gelato today, too, given that we need to hustle out the door early tomorrow to catch our flight to Paris. This one may have been the best. I ordered something a little different this time, what looked like a chocolate covered ice cream ball. The kicker? Not only did it have vanilla gelato inside, there was a shot of whiskey.

Today’s photo is actually the last one I took, just a few minutes ago, in fact. The girls and Melinda are in front of Milan Centrale, the train station, as impressive of a train station as I’ve ever seen.